“He is Archimedes, Mick Jagger, Salvador Dalí, and Richard Feynman, all rolled into one.”

As many would know, the PhD journey kicks off with a dive into a vast ocean of subjects and information and theories and ideas.  Although I knew from the start that my research would concern the subject of urban complexity with a focus on the city of Cape Town, I had no idea whether this would entail a study of a socio-economic dynamics or land-use change over time.  Consequently, I started off by investigating methodologies for studying complex systems:  agent-based modelling and cellular automata.  Three names frequented my voyage into cellular automata:  Michael Batty, Stephen Wolfram and John Conway.

John H. Conway was an English mathematician from Liverpool who spent three decades studying mathematics (incl. symmetry) at Cambridge University, before he moved to Princeton University and held the title of John von Neumann Professor Emeritus (Applied and Computational Mathematics) for more than a quarter of a century.  His induction saw him writing his name down in the book that contained the names of Isaac Newton, Albert Einstein and Alan Turing.  John Conway was widely praised as genius by prominent mathematicians and known to be constantly thinking about anything.  “Most mathematicians are analysts or group theorists or number theorists or logicians.  John has contributed to every single one of those areas…”. (Roberts, 2015)

Most notable works by John include On Numbers and Games, The Symmetries of Things and The Book of Numbers.  However, John Conway is perhaps most famous for the Game of Life.

The Game of Life

Although cellular automata’s origins can be traced back to the 1950s, extensive popular interest only developed after John Conway’s Game of Life cellular automaton was introduced in a 1970 Scientific American article (Gardner, 1970).  The Game of Life takes place in a two-dimensional grid in which cells can either be alive/ON or dead/OFF and is defined by a set of rules which jointly determine the state of a cell, given the state of its neighbours (Moore neighbourhood of radius 1).

The rules are the following: 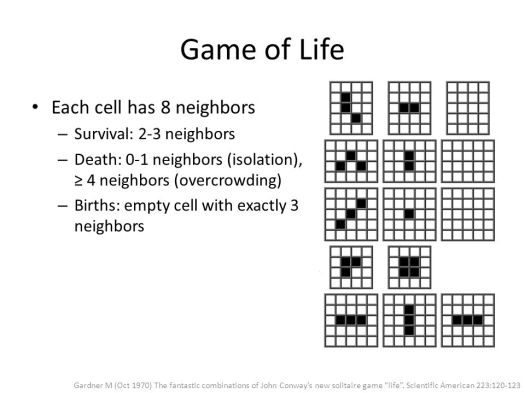 These rules were carefully chosen by Conway to satisfy the following criteria (Gardner, 1970; Game of Life):

To Play the Game of Life

Although the Game of Life is quite simple, it provides great examples of the phenomena of self-organisation and emergence.  Both these concepts are important and applicable to a range of biological and non-biological systems.  The game was designed to explore ecological communities and evolution.  “Conway’s organization of rules reflects the epigenetic principle, that genetic action and developmental processes are inseparable dimensions of a single biological system, analogous to the integration processes in symbiopoiesis.” (Caballero et al., 2016)

The Game of Life was also chosen by Google for one of its ‘Easter eggs.  Type “Conway’s Game of Life” and notice the light blue cells in the top right corner, which will gradually crawl across the whole page.